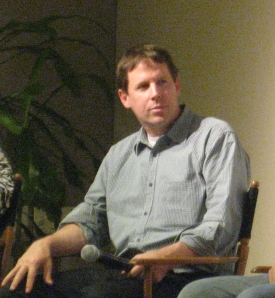 Mark Coker, Founder of Smashwords, Speaking About E-Books at the Writers Guild in Los Angeles

E-book publishing is an exciting new opportunity for writers, including therapist writers. According to Mark Coker, founder of Smashwords (an e-book publisher and distributor), e-books are hot. E-books are profitable, portable, affordable, compact, easy to purchase, and available by the thousands. Sure,  some authors are only making enough for a dinner a month, others are making enough for a car payment, a house payment or their kid’s college tuition. For still others, just getting published for the first time works. It depends on your goal.

Last week Mark Coker spoke two nights in a row to enthusiastic audiences of writers at the Writers Guild (WGA) West in Los Angeles. On the first night he was on a panel, E-Publishing: Self-Help for WGA Members. On the second night he did a solo presentation, How to Produce, Publish and Distribute an E-book, sponsored by Northwestern University Entertainment Alliance (NUEA). “Self-publishing has been a dirty word until five or six years ago,” Coker said. “Now it’s got respect.”

Coker began his solo presentation with the story of how he got into the e-book publishing business.  Some years ago he and his wife, Lesleyann Coker, a former reporter for Soap Opera Weekly Magazine, wrote a novel called Boob Tube, a behind-the-scenes look at the world of TV soap operas. They had a top literary agent who submitted the book to publishers, “and we got rejected by every publisher twice. I was disappointed that a publisher had that power to slam the door in my face.” He made a study of what’s been going on in the publishing field and concluded that traditional publishing is broken–losing money, still doing business the way they’ve been doing it for 150 years, ignoring the digital revolution (including e-books), publishing only the familiar, and financially unable to take chances on new writers. As a result, “millions of writers are going to their graves unpublished”

Coker’s solution was to start Smashwords. In 2008, their first year, the company published 140 e-books. As of September 2011, they’ve published 73,500 e-books.    “Today, anyone can be published in minutes and start selling world-wide,” he said, “and you need never have someone tell you no again.”  Smashwords charges nothing, but takes a 15% commission on sales.  That doesn’t mean every book is a good book. “We get too many books that aren’t ready for prime time. But now it’s the readers, not the gatekeepers (such as agents) who decide what’s worth buying. Bad books will sink.”

It’s quite simple, Mark Coker said, “You upload, distribute and get paid.” A Word file is uploaded into what Smashwords calls the “meat grinder.” Coker warns, “It’s very important to follow instructions or you get hamburger.”  (He stressed the importance of a professional-looking cover, whether you DIY or hire an artist). Smashwords automatically turns a file  into nine different e-book formats and distributes it to such retailers as Apple iBooks, Barnes & Noble’s Nook, Sony and Kobo. “We work with everyone except Amazon, but are hoping to do so in the future.” The author keeps all rights and sets the price of the book. Authors are finding they can make more money selling e-books for 99-cents or $1.99 than many traditionally published authors are making on their print books. And because e-book distribution is global, authors are reaching millions of English speaking readers in countries like India, Australia and the UK. “So if you have stuff (you’ve written) gathering mold, you can bring it to life. Screenwriters are taking scripts out of drawers, turning them into novels and putting them online.”

“Obscurity is a bigger risk than piracy”

Coker concluded with tips for authors on how to facilitate e-book success: “Don’t practice paranoia,” he said, especially about piracy. Low prices can discourage piracy, while codes to prevent piracy can be easily cracked. Some authors, he said, are even uploading their books to pirate sites as a marketing tool to broaden distribution! Coker’s other advice includes tips such as: write a good (typo-free) book; write another good book (multiple books sell); set your expectations low (most authors don’t make much money); “pinch your pennies” (don’t spend a lot to get published); “know your self-publishing objective” (platform building, revenue stream, or both?); distribute your book widely; give some books away; earn your readers’ trust (“trust is everything”); “be patient” (let your e-book find its audience); “start your marketing yesterday” (the moment you decide to write a book); join social media “as a participant”; and join writers groups online.

Coker predicts that within two years, the number of e-books sold will exceed the number of print books published, and within four years, e-books will earn more money than print  books.  To contact Smashwords and download two free How-To e-books, http://www.smashwords.com.

Looking for the Perfect Organizing System for Writing Projects

The late, great C.C. (for Calico Cat), contemplating her owner's latest attempt to organize a writing project, wondering, "Is this supposed to be a substitute for kitty litter?"

Keeping all my writing projects organized is like herding cats. They are hard to keep track of. What should my priorities be? Finish my book? Screenplay rewrites? Research for a new script for my screenwriting group? This blog? Article queries?  Essay submissions? Website updates? Writing a proposal for a possible teaching gig? Writing a new speech for my Toastmasters group? Jumping on the e-book and social networking bandwagons? Drumming up new clients for my editorial business? Marketing my little publishing company’s first book? And, oh yeah, I have a family. People. And a cat.

Back in high school I hated “writing tools,” such as the A, B, C, a,b,c outlines that were supposed to help me plan out my term papers.  I resisted them. Now I’m the opposite. Now I’m always on the lookout for new and improved lists, forms, tools, hints, tips or techniques to help me organize my work. I love lists. I love calendars, agendas and notebooks of all sizes, from cheap spirals to expensive Moleskins. ™ Now that Moleskins come in so many great colors, not just black, they are sooo hard to resist. Trouble is, once I write down all my projects in a notebook and close it, I don’t open it again. I thought I’d solved this problem when I bought a stack of little sticky “To Do” lists so I can stick an abbreviated “To Do” list on the cover of the notebook to remind me that there’s more stuff “to do” written down inside. This helps. Sometimes.

I’ve tried clipboards in different colors, too, one for each current project. I even tried hanging them on the wall near my desk. But then I’d forget which was which. Is the blue one for my blog? Or I’d get too lazy to take the clipboard down off the nail to add something else, so papers would end up in a stack on my desk. I dropped that system. Now I have a dozen nail holes in the wall.

I have a friend who keeps telling me to organize it all online, but I know me and I know if it’s not in front of my face, I’ll forget it exists. And don’t even mention using 3 x 5-inch file cards. I use them by the thousands. I have boxes of them. I use them for research notes, for filing “ideas,” and for planning out chapters in books and scenes in a scripts. For a 115-page movie script, I’ll write out the beats on the cards and then lay them out in rows–one file card for each minute of film. I’ll do the very same thing on sheets of paper using the smallest size Post-Its ™, one Post-It for each minute of the story. You can move them around nicely. Or I’ll print out the draft of my script, divide it up and move scenes around on the dining room table (see photo above).

Since you can buy 3×5-inch file cards in different colors, I’ve used colors, too – maybe green for the protagonist, blue for the antagonist, etc., but then I’ll run out of one of the colors and it throws off my whole system. You can also get the Post-It versions of 3 X 5 inch file cards, but when you gather them up they stick together, so that ends that for me. I’ve tried cork bulletin boards and push pins to tack up the file cards, but I have an aversion to cork (it squeaks and feels funny) and I usually end up stepping on a tack barefoot. So forgetaboutit! Recently, I read about an author who swears by 5 x 8-inch file cards for outlining book projects. I tried that too, but I find the cards too big and when I make a mistake on a card and throw it away, it seems wasteful.

Just two days ago–for $2.99 on the Red Tag table at Office Depot–I found a cool 9 1/2  x 11 1/2-inch dark blue folder with “Project Organizer” stamped in the cover. Music to my ears! Inside it are ten pocketed sections. I bought it, heart pounding, and rushed home and spent the next two hours slipping papers for ten of my projects into their respective, labeled sections, then I stuck a sticky “To Do” list on each section for tasks I need to attend to in order to complete the job. I love this folder/notebook! I just know it will get me organized. It’s my new toy. I carry it around with me, even to Starbucks..

Recently somebody oh so casually mentioned to me that maybe, just maybe, I should consider that my obsession with finding the perfect way to organize my writing is actually a way of avoiding my writing—and that the impulse I’d had back in high school to skip the outline and just jump in was the right one. But I don’t know…