Mishmash: What I Love About Thanksgiving 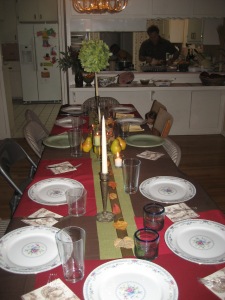 A delightful mishmash of plates, place mats, eating utensils, glasses, chairs, old recipes and new guests. It’s what I love about Thanksgiving. Have a seat!

Nothing fancy. Nothing matching. A rented table and a mishmash of plates, place mats, glasses, silverware, plastic ware, paper napkins, candles and a fire in the fireplace. And, of course, a volunteer in the background (in this case my son-in-law) to slice the turkey. All of this is what I love so much about Thanksgiving. My granddaughter, Lily, 8, had a special request: “Let’s go around the table and say what we’re grateful for this year.” We did just that. And we were all grateful for each other. For family. For friends. Precious. The best. Hope your Thanksgiving was as nice a mishmash as ours was.

It’s Not Easy Being Green

Writer as Witness to an After-School Gang Shooting. Photo Taken by Writer From a Safe Distance Away!

I was there being a good “green” citizen and recycling plastic bottles at my local supermarket. I filled a shopping cart with bottles and was pushing it towards the recycle booth when I heard men shouting. I looked over and heard “Pop!” “Pop!” “Pop!” and saw a man lying on the ground behind a car and two guys leaning over him, maybe shooting him again, maybe seeing if he was OK. The high school across the street had just let out so the area was swarming with teens.

It took me a second or two to realize this was REAL shooting (and it DOES sound like firecrackers), so I ducked down between the shopping cart and my car. I had my keys and cell phone in my hand. Crouching down, I opened my car door and crawled inside and scrunched down on the seat. As I was shutting the car door, I saw a car speed by and out of the parking lot — like a getaway car. I kept my head low and called my husband, then called 911. By the time I dared raise my head, there were cop cars there, a fire truck, a motorcycle cop and an ambulance. I got out of my car, still clutching only my cell phone and keys, and before I knew it the police had put tape around the whole parking lot and my car was trapped inside it — in police custody! “They have to look over every car,” I heard a cop telling another car owner who was complaining about not being able to leave. “What if there’s blood on it?”

I didn’t even have my purse with me. It was locked inside my car. I was there for a few hours. I went ahead and recycled the bottles. Later, when a detective came over to ask if I was OK, I said, “Oh, I’m fine. Fine.” Then I realized I had thrown my cell phone and keys away with the bottles! A little distracted maybe? You think? I went back to the recycle booth and we had to paw through all the yucky bottles to find my cell phone and keys.

The police kept my car there until after 9 pm (this was at 3:30 pm).  I was interviewed by two detectives and two members of the media and ended up on the 7 o’clock local TV news and in a newspaper story. From the stories, I learned it was a gang shooting and the guy didn’t die. He was taken to a hospital. My husband picked me up after work and later he went back with a friend to get my car. I noticed a mild case of PTSD for a few days after that — jumping at every “pop!” noise.

I’ve always said I don’t write dramatic fiction because I haven’t had dramatic experiences. Well, now I know how to write about an after-school gang shooting. Write what you know, right?

I want to add a P.S. onto this blog because I’ve been guilty of blog abandonment lately: My book, THE THERAPIST WRITER: Helping Mental Health Professionals (Timberlake Press), is out and available on Amazon and on Kindle. Wheee!

Tagged going green, how to, how to write, shooting, therapist writers, writing