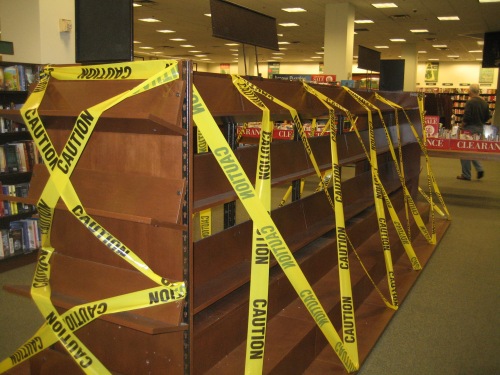 Another Barnes & Noble Becomes a Victim of the Traditional Publishing Sickness

Okay, so I know this has been going on for quite a while now, these bookstore closings, but what made this one worse was the fact that this Barnes & Noble happened to be MY Barnes & Noble, located in MY neighborhood, and I’d been running a drop-in writers’ group there for years.

The sign on the front door “We’re Closing” made us all  feel sick inside.  We’d already been through this once before. We’d met at another Barnes & Noble which had also succumbed. Now there are no Barnes & Nobles to run to!

So we’re meeting in a noisy coffee shop where the waitress never fails to come sailing over with a coffee pot held dangerously high  — “Anybody for a refill?” — just when somebody is reading the “big reveal” part of their story.

It feels so much better talking together about writing and reading one’s writing aloud when you are surrounded by thousands of books.  On TV I heard an indie publisher interviewed who said of the 100 bookstores that used to stock his publications, 70 were now out of business, meaning he had to go look for a job. That is sickening.

I don’t really understand all the (no-doubt) sleazy economics behind the traditional publishing sickness, but I do know that I just hate it when a bookstore closes.  It’s not only sickening. It’s a crime.